NEW MEXICO:
Carzalia Valley Produce in Columbus, NM, is looking at late May/early June start to harvest and will ship through early September. James Johnson told OnionBusiness.com that favorable weather has blessed the Valley and the crop of fresh market onions looks great. Earlier in the growing season he said, “This is the best crop I’ve ever had.” The company starts with its Merlin sweet for the first week to 10 days, followed by the Red Rock red variety and the White Castle white the last week of May.

Chris Woo of Potandon Produce said that company’s New Mexico deal is getting geared up for new crop to start the third week in May. Quality of the new crop looks to be excellent, Chris said.

ARIZONA/MEXICO: Baker Packing in Ontario, OR, will start its Yuma/Mexico shipments the week of May 9, and Bill Trask of Baker commented that the Yuma deal is one of the company’s smaller areas with about 60 acres.

CALIFORNIA/San Joaquin:
Baker Packing anticipates starting the San Joaquin Valley deal just after Memorial Day. The operation hasn’t experienced any issues and expects a normal crop this year. Quality is reported as good, and the weather has been favorable so Baker anticipates everything will run smoothly. “The market out of San Joaquin will definitely be based on demand this year,” Bill said. “Our focus with this new crop shipped from the area is to upgrade the quality of the pack. We’re hoping this will contribute to increased our customer satisfaction and ultimately more sales.”

COLORADO Western Slope/UT:
Don Ed Holmes of The Onion House in Weslaco, TX, told OnionBusiness.com the intermediate onions from Colorado’s Western Slope will start shipping the last week of August, and Utah will come in the first weekend in October. 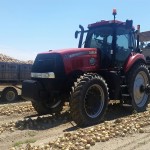