In his 30 years with the National Onion Association, Executive Vice President Wayne Mininger has organized and coordinated five international trips, offering them to members of the association and also to friends as educational/networking and sightseeing opportunities in settings around the world.

While the excursions are not officially sponsored by the NOA, they are both endorsed and encouraged by the association’s board of directors, and Mininger told OnionBusiness.com each of the five adventures has “worked out extraordinarily well.”

The most recent tour was to Peru and Panama in January 2016. It was a trip three years in the making and one that involved 38 NOA members and friends, Mininger said. And, like the four previous travel events, it afforded the U.S. onion group connections to onion grower/shippers and handlers in other nations.

“The first trip was in 1995,” Mininger said. “That took a group to Australia and New Zealand for three weeks. In 2002 we went to Brazil, Argentina and Chile, and in 2008 we went to the Netherlands and Spain, with some of the group pre-touring in London and others pre-touring in Paris. And in 2012 we traveled to South Africa.”

Each trip has come about through extensive energy and work on the part of Mininger, but he said the outcome has made each venture outside the United States “more than gratifying.”

This year’s international trip began Jan. 12 when the group launched its sightseeing/ag educational itinerary in Lima, Peru, at the huge produce market. After Lima the tour took in two onion farms and a packing shed in Arequipa, and that setting also provided a chance to see a bit of the country’s amazing history.

Iconic Cuzco was the next stop, where examples of the Incan empire still remain. “There’s fascinating history of both the Incan and Spanish empires,” Mininger said, noting that the group made the journey to Machu Picchu, the ancient Incan citadel and city and one of the wonders of the world.

After the dizzying heights of Machu Picchu, the group took a motorcoach trip to Puerto Maldonado, an Amazon rainforest city on the Madre de Dios River tributary to the Amazon. “We spent several days in the rainforest ecosystem,” Mininger said, adding that the next leg of the trip was to connect back to Lima and then travel to Panama.

“We observed a bit of the historical and political history and got to see the expansion of the Panama Canal, which will triple its capacity,” he said. From Panama the group returned to the United States.

“I worked on the trip for three years,” Mininger said. And when asked if there’s another trip in the offing, he said, “I’m taking a breather right now. But I do have some ideas.”

Take a look at these FABULOUS photos provided to OnionBusiness.com by Robert Bell of Western Onion. 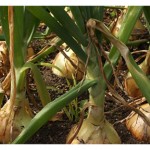