Georgia:
Dale DeBerry of AllVeg Sales in Bourne, TX, told us the Georgia crop he represents is “looking good” for a spring harvest. “My guys are finished planting,” Dale said. “I’m not sure about the rest of the area, but if they aren’t finished, they’re close.”

Texas Rio Grande Valley:
Don Ed Holmes of The Onion House in Weslaco said Texas has seen cooler weather in recent days, with more in the forecast. “We planted a little later this year,” he said. “December is too early to tell when the crop is coming, but we expect to start in early April, depending on how the weather cooperates.”

Mexico:
Don Ed Holmes of The Onion House in Weslaco, TX, said his Tampico deal still looks good for a light start in mid-January. Weather in recent weeks has been warm, but he said on Dec. 14, “Mexico has cooled off, and that’s slowed the crop down.” Don Ed added, “The weather is a little more seasonable there now. We could have some carton sweets in mid-January, but the real volume out of Tampico will come in February.”

Dale DeBerry with AllVeg Sales in Bourne, TX, told us the Mexican crop is “coming along good, and the recent rains have been great.” He said, “The growers are all through planting and transplanting, and now we just wait and see what this market does.” Dale said he expects shipments to start in late February or early March, and the split is 10-15 percent whites, 15 percent reds and the balance in yellows. “Most of my business is large yellows for processors and foodservice,” he said. He expects the season to run through late April.

Shawn Hartley with Utah Onions in Syracuse, UT, told OnionBusiness.com his company’s Tampico, Mexico, crop is “looking good with the warm weather.” The season will start in January or February, Shawn said. 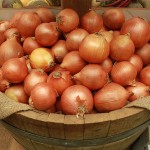