Texas Rio Grande Valley:
Marvin Davis with Tex-Mex Sales in Weslaco said on Dec. 21 that the Texas crop is “looking very good and coming right along,” but he added that it’s a little early to speculate on harvest dates. Marvin added that the region experienced a bit of a cold snap, but he said it was actually good for the onions because it acclimatized them.

Vidalia:
John Shuman with Shuman Produce in Reidsville, GA, told us the 2017 Vidalia crop is 90 percent of our crop has been planted, and due to heavy rains in early December, Shuman saw some fields wash. “But there’s no significant loss at this point, and overall the crop looks healthy,” he said. John added, “We are very early in the growth process, but as of now the crop looks normal, and we are on track for an April harvest.”

Mexico:
Marvin Davis with Tex-Mex Sales in Weslaco, TX, said the quality of the Mexico crop looks very good now, and he anticipates that early Mexican onion shipments will be ready toward the end of the first week in January. 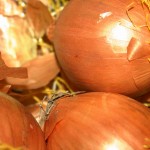