One takeaway from a recent ag business conference hosted by Northwest Farm Credit in downtown Boise is that the economic slowdown is having a positive – though likely temporary — impact on the availability of trucks for produce shippers.

OnionBusiness.com sources speculate as the trucking industry continues to see a decline in a career-seeking workforce as jobs in construction and other fields seem to be picking up. But for the time being, we’re told, trucks are easier to find.

Improved through Idaho, on the other hand, is not as easily attainable, as we’ll address.

Kohl, Professor Emeritus of Agricultural Finance and Small Business Management and Entrepreneurship in the Department of Agricultural and Applied Economics at Virginia Polytechnic Institute and State University, has conducted more than 6,000 ag workshops and seminars over the course of his career and is author of more than 1,300 published financial and business articles. His Ag Globe Trotter appears at https://www.agcountry.com/Tools/Ag-Globe-Trotter.aspx, and the Nov. 6 post deals with the “Evolution of an Economic Reset: Part 2,” which advises that the global economic slowdown, “continuation of the strong dollar, softening of biofuels and ethanol mandates and decreased oil prices are all suppressing commodity prices worldwide.”

Moreover, he said, “The[economic] reset is in the early stages and at this point, only an unexpected event with significant impact… will disrupt the reset pattern.” Kohl noted that patterns of “financial and economic behavior inside the agriculture industry are also beginning to evolve.” Complacency in high net worth and equity is being replaced in some cases by the need for “financial liquidity, despite equity.” And the patterns are expected to continue as the reset progresses. Kohl’s addressed time frame is from 2016 to 2020 for the reset.

He contrasted the current ag reset with that of the 1980s, noting today’s farm debt is “very concentrated.” He added that 263,000 farms, or 12 percent of the 2.1 million farms and ranches nationwide, carry 63 percent of the farm debt.

“Producers must be prepared to build and present a strong, positive financial case, despite negative margins, in order to maintain eligibility for borrowed monies. Highlight the positive trends in your business; not just the last few years. This will be an important priority, especially, for the 2016 to 2017 time period,” Kohl said.

He also said, “As with any cycle, high prices cure high prices. In other words, high profits in a sector increase daily operational costs and eventually, squeeze the profit margin to zero. The opposite can also be true, low prices will cure low prices as adjustments return costs back to normal range. This will occur in the later stages of the cycle.”

As hard as the reset can and will be, Kohl said that “neither good times nor bad times last forever.

Regarding rail and the potato and onion shippers’ pursuit of more and better options, Dick Thomas, Potandon Produce VP of Sales and Marketing, told OnionBusiness.com that discussions with Union Pacific continue.

However, an aging Union Pacific railcar fleet presents additional problems. UP has announced its plans not to replace a significant number cars due for mandatory decommission.

Onion Market News from Around the Country, Nov. 5 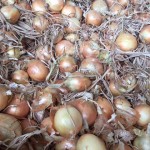