A recent facelift for sunsetonions.com, the website for Prosser, WA-based Sunset Produce, has proven to be a terrific move for the multi-generational onion grower/shipper operation.

And according to Sunset’s Brenden Kent, vice president of sales and marketing, two fathers chatting during the All-American pastime of Little League had a lot to do with how the new site came together.

During the year, Sunset had discussed updating the old site, and Brenden told OnionBusiness, “This is kind of a cool story. One day I was sitting at my 11-year-old son Cason’s baseball game helping keep the pitch count when I struck up a conversation with another dad keeping up the scoreboard sitting next to me. Both of our sons were pitchers on the Little League baseball teams so we had something in common.”

Brenden continued, “He asked me what I did for a living, and I told him that I was in the onion business. He said that he helped companies like ours do web-based marketing with new web design along with tracking any new data that comes along down the road. He had just moved his family to the Tri-Cities from Bend, OR, where he had worked with several companies.”

Because of that chance meeting at their sons’ baseball game, Brenden said, “Greg Buchannan and I have since become good friends, and so have our sons, Cason and Gavin. And it has turned into a great partnership for both of our companies. I feel fortunate that I met Greg because we had been discussing what we needed to do for a new Sunset Produce web design, but we hadn’t found the right fit until then.”

The redesign is fresh and engaging, with the company’s story and family history well told and the onion program explained with focus on the operation’s sustainability and commitment to good stewardship. The gallery features both stills and video, and the contact information makes it easy to communicate with the company.

And, Brenden said, Sunset is able to quantify the site’s impact.

“We have been able to track the numbers,” he noted. “On our old website we were getting between 50-100 visits a week, and that has increased more than 500 percent to an average of 300-600 weekly visits since we launched the new website. We also added a unique contact form that helps us connect with consumers and we have generated a few new customers from this addition. The customer and industry feedback has been tremendous.”

It’s a prime example of 21st century technology, something that has been embraced by the founding families.

The website shares that the family owned corporation was formed by brothers Robert Munn and Duane Munn in 1989.

Their father, Lorin Munn, began farming near Ogden, UT, where the brothers grew up and worked alongside their dad.

“In 1954, Lorin and Fay Munn moved their family to the Eastern Oregon/Idaho area to expand their farming enterprise,” the site says Their farm eventually grew to encompass 1,820 acres, including their first 20 acres of onions grown in 1965 which was a test year for this new crop. They enjoyed success growing onions and the acreage has grown each year since that time.”

In 1976 the family relocated to eastern Washington, “where new land was more available to develop under irrigation. Lorin and his son Duane formed L&D Farms and at that time began developing 3,200 acres of a former dryland wheat farm under center pivot irrigation. Simultaneously, Robert Munn and his family moved to the same area and bought more land to join in the development project along with some farmer friends from Idaho. Today Sunheaven Farms LLC stands as a beacon for first class large scale irrigated farming with nearly 25,000 acres under cultivation.”

The site explains that each farmer “owns their own acreage and farm as individual entities.”

Today R. Munn Farms LLC consists of Robert and Lorna (now retired), and their three sons Randy, Ryan, and Rob. Randy has three grown sons that are now farming with their dad so the fourth generation is continuing a successful history.” This year was the 54th for growing onions.

“Duane Munn and Sons Farms LLC is now owned and operated by Duane and Susan Munn and Shane Munn and his family including William who wants to follow in his dad’s footsteps as well. Both families are fourth generation farmers now. Duane and Shane farm approximately 6,000 acres with 2,370 acres of onions for Sunset Produce.”

Brenden said, “It is truly a family-owned company from the ground up, with the family involved in all facets of the operation. I feel honored that I get to be a part of this great organization.”

The rich family commitment is shown in the product, which includes a sweet program that makes up about 20 percent of the total volume. Brenden said the category will continue to grow.

And he explained the “Heavenly Sweet” package, with its distinctive – and fitting – lavender label.

“We originally designed the box with a black background and red lettering, and I really liked the design,” he said. “However, it really didn’t match the product that was in it. So I began thinking about changing the graphic.”

He continued, “I was in the grocery store one day with one of my younger kids when they came up to me and asked if they could buy some taffy that was in the candy aisle. What they came back with was some lavender colored taffy, it finally dawned on me that we needed to have a sweet candy-like looking color for the onions. So I sent my ideas for color along with our label to a different box company, and they came up with the new design. Now customers call in almost daily and ask, ‘Do you have any more of that purple box? Our customers like those sweet onions in the purple box.’”

And, he said, “We will be launching another sweet label to go along with our Heavenly Sweet brand called ‘Sun Kissed Sweets.’ Stay tuned for some exciting info with that label and some variety-specific sweet onions that we are working on.” 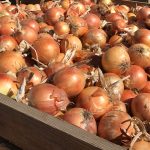 Market and Crop Update for November 9