With the 2016-17 Idaho-Eastern Oregon onion season going strong, brokers are busy racking up sales as well as points as part of this year’s USA Onions Broker Incentive Program.

For several years USA Onions has offered incentive prizes based on broker sales, and this year the promotions committee is appealing to the techie side of participants.

Based on points accumulated through loads purchased from Idaho-Eastern Oregon Onion Committee shipper members between Sept. 1, 2016, and Feb. 1, 2017, brokers are competing for more than a dozen prizes, including a DJI Phantom 4 drone bundle complete with craft, controller, case, extra battery and other accessories.

Other prizes in the program include the same drone model, controller and battery without case and extras; a 128 GB iPad Pro with wifi; a GoPro Hero; 32 GB iPod Touch; Beats Solo2 headphones; Panasonic Lumix camera; the Xbox One Console with 1TB hard drive and more.

Contest rules are simple: Brokers must keep track of purchases made during the incentive period, and prizes are awarded according to points for the number of loads from IEOOC shippers. Each load is equal to eight points, with a maximum of 2,504 points accruing.

However, a random drawing for 2,000 additional points will take place at the end of the program. Each participating broker’s name will automatically be entered in the drawing, and all extra points accrued after the maximum of 2,504 will be allowed as entries in the random drawing. For full details, go to usaonions.com and the Brokers tab. 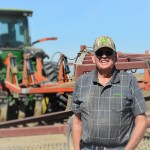