Market and Crop Updates for June 22

Georgia:
Danny Ray with Ray Farms in Glennville reported that demand has been good for the Ray’s Vidalias coming out of cold storage. “Since we are bringing onions out of cold storage, we can only pack so many each day, but demand has been good,” Danny said on June 21. “We have July 4th coming, and demand is also strong at this time, so it looks like the market is on the upswing. We’ll have to see how movement goes over these next few weeks, but we anticipate shipping through the middle or end of August.”

New Mexico:
Derek Ennis with L&M Marketing in Raleigh, NC, said demand has increased this week. “We expect the markets to start improving for our New Mexico deal,” Derek said. “With the heat in California, we anticipate this will contribute to the market increase for New Mexico. Right now, we are tight on whites, and we only have a few medium yellows available for mixers, but other than that we pretty much have availability on all colors and sizes.”

T.J. Runyan with Mesilla Valley Produce in Las Cruces told us June 21 that “it’s hot” in New Mexico, but he added, “Movement is really good. The overall quality of the crop is excellent, and demand is good. Receivers are happy with the product.” Mesilla Valley is shipping reds, whites and yellows, and T.J. said currently the company is “working our way through a lot of big onions.” He continued, “That will shift when we get into our transplants and spring seeded around July 1. It should take some of the pressure off the big onions.”

Walla Walla, WA:
Michael J. Locati with Mike Locati Farms Inc. told us June 21 his operation began the season on June 15. He said, “The crop looks good. We had a slow start due to weather, but we are shipping now. We’re picking every day to keep product flowing, and the first couple days have had smaller size – but as we move through fields, the onions are sizing up nicely.”

California Central Valley:
Robert Bell with Western Onion Sales based in Camarillo told us on June 21 all varieties, colors and sizes are moving well out of the Arvin region of the Central Valley now. “Sizes are big overall,” he said, adding that mediums are tight and in demand. Heat has been an issue, he said, and some flat reds were particularly affected. His operation will start harvesting yellow organics on June 25 for product on June 26, and he added that increased picking will begin June 26, with the onions going into storage. Check out Robert’s “Video of the Week” as part of this week’s E-News.

Cindy Elrod with Yerington, NV-based Peri and Sons told us triple-digit heat has also hit the Firebaugh area of the San Joaquin Valley. In addition, Cindy said many companies, including Peri and Sons, are moving into a gap period between short day and intermediates. “The first intermediates will come around July 4, and we’ll see what happens during the month,” she said. The gap is for all sizes and colors, and while operations gap differently from each other depending on planting, Peri’s started with whites, then gapped with reds and on to yellows. “The next few weeks will be interesting,” she said.

Rick Minkus with Minkus Family Farms in Hampton, NY, reported Minkus is currently marketing onions out of California and New Mexico, and he said all sizes and colors are available. “It’s really a mixed bag on quality,” Rick said. “We are seeing some nice quality, but you know they have had some high heat in California and some onions have been affected.” Rick also said that the market is flip-flopped on pricing for yellow mediums and jumbos. “We’re getting more for mediums than jumbos right now,” he said. “And you know what that means,” he laughed. “Mediums are suddenly starting to get bigger!” 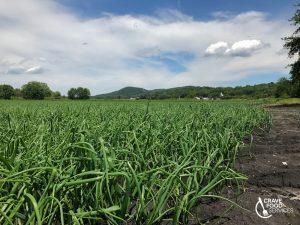 Michelle Gurda with A. Gurda Produce in Pine Island, NY sent in this beautiful photo of their crop progress.

Rick Minkus with Minkus Family Farms in Hampton reported on June 21 that they have received plenty of rain, but overall the crop is in very good shape and on schedule for a normal harvest. “We will probably start hand topping some of our transplants the third week in July,” he said. “As soon as I get back from the summer NOA meeting, we will be ready to go.”

Colorado/Kansas:
Derek Ennis with L&M Marketing in Raleigh, NC, said on June 21 the company’s Colorado/Kansas crops are doing very well and progressing nicely. “The crop is looking really nice, but we have two more months yet, and so we are hoping that the favorable weather conditions continue,” Derek said. 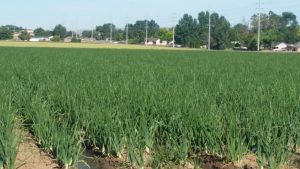 Grant Kitamura with Murakami Produce Co. LLC (Now, Baker-Murakami Produce Co.) in Ontario, OR, said on June 21 that the crop is growing well  with the warmer temperatures. “Today the high is 87 degrees and which is perfect weather for onions,” Grant said. “Things are coming along, but I can tell you it’s definitely not going to be a bumper crop.” Grant said that it’s anticipated that Idaho-E. Oregon will have lower yields this season, due to the late planting, inconsistent early weather, and “less than perfect stands.”

Derek Ennis with L&M Marketing in Raleigh, NC, said on June 21 things are improving for the crops in Idaho-Eastern Oregon. “The recent warmer weather has been helping the crop along,” he said. “With the late plantings and early weather, it’s still too early to tell how it will all turn out, but things are definitely looking better. We just hope everyone can get their new sheds and facilities built in time to ship.”