It is our pleasure to provide River Point Farms in Hermiston, OR, with a double dose of exposure this week – we’re profiling Stefan Matheny, River Point’s energetic director of sales, as our Millennial Trailblazer. And we’re giving props to his colleague Mackenzie Mills who is among the newest class of the United Fresh Produce Industry Leadership Program.

Stefan, to anyone who knows him, embodies not only the youthful optimism and enthusiasm of his generation but is also a remarkably focused and 10-year veteran of the onion industry — all at age 33.

Though he wasn’t born to onions, Stefan is from a farming family, and Oregon is his home state.

“I grew up on a dry-land wheat farm outside of Heppner, OR,” he told OnionBusiness recently. Heppner, southwest of Hermiston, was where he attended elementary and high school, and he graduated in 2002.

“After high school I went on to Linfield College in McMinnville, OR,” he said. He graduated from that college, which is southwest of Portland, with a Bachelor of Arts degree in International Business in 2006.

The leap from international business to an onion field is, as folks in the industry know, actually not that far, and it wasn’t long before Stefan found himself in the thick of Hermiston’s onions.

“My first job in the onion industry came shortly after graduating from college when I took a position with American Onion in Hermiston as the fresh pack plant manager,” he said. “At that time American Onion was solely a grower/packer of fresh, whole skin-on onions.”

Things moved rapidly in his career, and he explained, “About three months after I started, American Onion merged with Rivergate Farms which was a fresh-cut onion operation on the other side of town. The two companies rolled together, and we became River Point Farms in June 2007.”

In his position as director of sales, Stefan is “focused primarily on managing the open market sales of the company. This includes Yellows, Reds, Whites, our Hermiston Sweet® Yellows and Hermiston SweetRed® programs, and our organics,” he said.

His background in operations “has certainly helped my development in a sales role,” Stefan said. And he credits River Point Farms with teaching him the value of teamwork.

“It has been great to be involved in planting, harvest, storing and handling decisions through the years at River Point,” he said. “It definitely gives you a real appreciation for the hard work it takes to produce a high quality crop each season. Our farm and ops teams do a great job.”

He has also honed a solid perspective of the industry, recognizing change as not only inevitable but also at times necessary.

“The onion market is ever-changing,” Stefan said. “I have seen the highs and the lows over the last 10 years, and every year is different.”

He added, “There are many moving parts throughout the industry that can make or break a market, and you have to be ready to jump on opportunities when they arise, however long or short they last.” 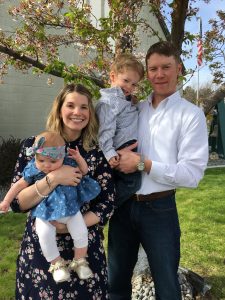 His thoughtful observations come from someone who is deeply committed to his career, but Stefan is also a committed family man. He and wife Chelsea, who have been married for six years, are the parents of two youngsters. Sonny is three years old, and Scout is six months.

And away from the job, Stefan spends a good deal of time outdoors and with Chelsea and the kids.

“I enjoy water and snow skiing, golf, hunting and spending time with family,” he said.

Like most Millennials, Stefan is very dialed into technology, and he said he’s seen it benefit the onion industry since he came on board in 2007.

“There have been some good strides made over the last 10 years in automation on the farm and inside the plants,” he said. “There will continue to be this push by growers/packers going forward.”

“Our new crop starts with overwinter yellows and reds in June and July each season,” he said.

That shipping window is between four and six weeks, and “Then we move to shipping transplants through the middle of August, finishing with harvest of direct seed intermediate and storage varieties in September/October, shipping these varieties for 34-40 weeks.”

“All product is packed/fresh-cut at our Hermiston facilities,” he said. “Yellows, reds, and whites are under our ‘River Point Farms’ label. We also have seasonal sweet yellows and sweet reds under our ‘Hermiston Sweet’ label.”

That he is accomplished on multiple levels is definitely of value to his career and to his personal direction in life, and Stefan Matheny said he takes his role in both areas seriously.

“As a Millennial I believe we have a great opportunity to embrace and build upon the advances in technology that we have witnessed growing up,” he said of his generation.

“I think the entrepreneurial and innovative spirit is strong, and we are positioned well to take these advances to newer heights across many industries, including agriculture.”

Check out these great photos from Stefan! 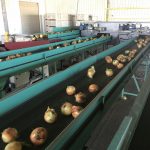 Market and Crop Updates for June 22