Our friends at the National Onion Association, headquartered in Greeley, CO, have released April Statistics for growing regions across the United States and also in foreign markets.

NOA Executive Vice President Wayne Mininger reported that in the Eastern U.S., quality is sound, movement active and demand steady, particularly going into Easter. There was a bit of a lull for some shippers after the holiday, but Mininger described the market as “positive.”

For the Central U.S., most sheds have finished, with “holdings in few hands.” Quality is described as “good to exceptional,” and markets as “favorable with steady pricing.”

Out West, there has been active movement and “rapidly diminishing supplies as additional shippers finish each week placing supplies in fewer hands.” Mininger said the West saw a “short burst of extra demand noted prior to Easter holiday,” and he said pricing has been good. There has been “some softening noted” as month progressed and supply locations transitioned. “Tedious grading and higher shrink a common theme in the Northwest,” he wrote, noting that a “substantial portion of inventory in Idaho/E. Oregon contracted to processors per usual late season practice.”

In Mexico, Tampico shipments have been active, and Mininger said that market watchers “feel volume has peaked and should taper per seasonal precedents soon.” He also said that offerings “seem to be more orderly and measured as compared to the high crests commonplace for years.” Both quality and size coming out of Mexico has been called very good, and the growing area has seen good harvest weather. “Prices positive, but mention of softer demand and pricing towards month’s end,” he wrote. Also, supply and demand on both sides of the border are “expected to maintain stable market conditions as storage volume tapers down and Texas crop volume builds in the distribution stream.”

South Texas is seeing good size, good yields and good quality, and “timely rains mid-month were beneficial as this crop is described as one of the best in years.” The consensus is that acreage is lower and overall volume “should slot nicely into the tapering volume of the storage crop and Mexico’s fresh crop.” S. Texas had “exceptional Easter demand” that was followed by a lull expected to be short-term, and marketing is moving “at favorable distribution rates and pricing.”

Arizona has a slight increase in acreage, with the “crop development timely and healthy throughout a favorable growing season.” Mininger said stands are good and sizing indicates a normal crop with usual harvest time. “Quality should be very nice; market prospects favorable,” he said.

Georgia’s acreage is “stable, possibly a bit lower, but certainly in line with recent seasons,” and some sweet onions are expected to ship prior to April 25, he said, adding, “however, official trademarked ‘Vidalia’ onions will initiate on that start date per Georgia’s Commissioner of Agriculture,” which is April 25. A “normal to warmer growing season” has resulted in good size and plant heath, with “expected quality termed exceptionally good.” Georgia saw rainy weather at planting and early growth stage, which caused some stand reductions, “but overall the stands are good.” Mininger wrote that “viewpoints point to positive market/pricing prospects.”

In New Mexico, acreage is termed “stable, possibly up slightly, helping to secure ‘positive results’ based on consistent and orderly shipping season running late-May thru mid-September.” Mininger write that the growing season weather has been “exceptionally favorable from the beginning for the various crop segments in the ground,” and both growth and health have been “impressive.” He said that all onions are — seeded overwinters, seeded intermediates, transplants – are “progressing well,” and maturity is termed normal to early, with “segment maturities expected to facilitate seamless harvest timing.”

Up in Washington, Walla Walla has had an exceptionally favorable winter and “very nice transition to spring,” he wrote. Acreage is stable and the crop “looks excellent.” Production this year is expected to be normal to above. In the Lower Columbia/Umatilla Basin, the growing weather to date “has been kind to hybrid ‘overwinters,’ and the crop looks very good, should produce well and is ahead of normal maturity at this time.” 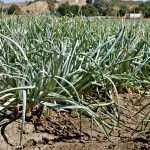