Our friends at Owyhee Produce in Nyssa, OR, and Parma, ID, kick off our PMA coverage, which will be the focus of next week’s newsletter, with its rollout of compostable hemp-based bags using help grown on the company’s Treasure Valley farmland.

You can see the prototypes of the new Farm-F.r.e.s.h. packaging at PMA Booth 2880 in Anaheim, where the Owyhee team members are on hand to explain the philosophy and process to visitors.

The bags, which are planned as a spring 2020 packing option, are part of Owyhee’s regenerative environmental stance. In a press release issued on Oct. 9, the company notes that for the first time in its multi-generational history, “Owyhee Produce will start growing 500 acres of industrial hemp on their Oregon farm land, this year.” The industrial hemp will be used initially to create CBD oil, with the leftover fibers then used to “create compostable bags and other industrial materials.” The process is full circle and part of Owyhee’s “mindful efforts to develop plans in reducing carbon emissions, pollution and waste…”

Shay Myers, Owyhee Production GM, said, “We know not everyone can commit to these types of standards today. However, for the most demanding companies out there, those companies who have made the massive commitment to reducing carbon emissions, pollution, and waste, we are here. We are among the most climate conscience and progressive farmers in the country, and we want to partner with the best companies to make a difference.”

The release went on to say, “In addition to producing compostable onion bags, Owyhee Produce has plans to strengthen the foundation of their motto, ‘There’s a difference!’ by being responsible farmers for the future.”

Looking to 2022, the company plans for a greener future with 100 percent compostable, biodegradable or recyclable packaging as well as being fully regenerative and carbon neutral. In addition, Owyhee is working to reduce its water and fuel usage by 25 percent per acre and plans for zero monoculture.

“The regenerative idea just gained traction in recent years, due to the political climate of ‘going green,’ but it has always been a part of the company’s best practices. While onions may be their most demanding crop, they only grow onions in each field once every five to six years,” the release stated. “This rotation of crops restores the soil’s health naturally, reducing the need for synthetic fertilizer or fumigants, which lessens their impact on the environment and maintains their commitment to yield high-quality produce. This is why a compostable bag made more sense to them, it breaks down faster and improves the soil’s health.”

Shay added, “It is our duty to ensure that tomorrow’s farmers are able to efficiently farm from our sustainable farming practices of today.”

Owyhee believes that “every crop serves a purpose,” and as part of its rotation plan, beans and peas are planted to “fix nitrogen levels in the soil.”  In addition, beets, alfalfa, and corn are used for weed control. “Corn, wheat, and hemp, to increase organic matter and soil health,” the release said. “Mustard and Mint are used as natural biofumigants to prevent pest infestations other soil-borne diseases.”

Owyhee Produce’s roots in the Treasure Valley’s unique soil were planted more than six decades ago with Owen Froerer’s “yearning to connect with the land and support his family.” Today, three generations later, “it is a hybrid farmer-agri-entrepreneurial family business that practices sustainable farming over 4,000 acres in Oregon and Idaho.”

Moreover, “The company proudly grows various produce at Froerer Farms for millions of consumers nationwide. They take special consideration in providing customers with some of the finest onions on the market.” For more information, visit www.owyheeproduce.com.

Trevor Frahm laid to rest in Ontario, OR 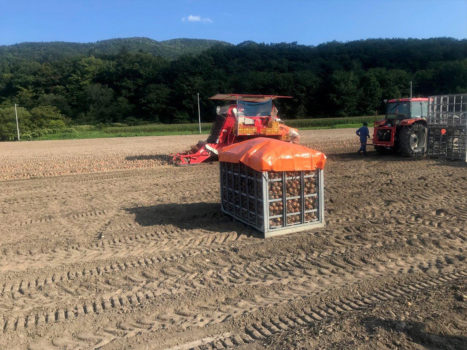