Tim and Lisa relocated to the Idaho-Eastern Oregon onion-growing region from Springdale, AR, in 2009, bringing several years’ experience from Tyson Foods. From 2009 to late 2016 Tim was with Dickinson Frozen Foods, where he sourced raw product and developed relationships with onion growers throughout the region.

“Lisa and I both have a corporate background,” he said. While at Tyson he was strategic buyer for fruit and vegetables, dairy and cheese. Lisa worked as purchasing coordinator.

“We came to Idaho in 2009, and my objective was to get closer to the soil. I have worked with the growers in the Valley, and I know a lot of buyers for processing and also many in retail,” he said. In all, Tim has worked in the food industry for 32 years.

The new company was formed Jan. 1, and Tim said the couple work in secondary markets to source product for processors. Tim works the sourcing/selling desk, and Lisa handles administrative tasks.

“She is actually the one in charge,” he said. “Someone’s gotta keep me on a leash.”

In addition to brokering product, Fresh and Ugly also offers consulting services to its clients.

“Whoever my customers and suppliers are, I go out and work with them,” Tim explained.

On the selling side of the equation, Fresh and Ugly is working for processors in California, Oregon, Washington and Idaho, Tim said. He said he sources from growers in those areas as well as companies in Mexico.

While onions are expected to make up 50 percent of Fresh and Ugly Produce’s business, Tim and Lisa deal in “A to Z” items, including bell peppers, winter squash, red potatoes, sweet potatoes and spinach. Conventional and organic product is handled, Tim said.

He said the goal is to expand into additional regions for both sourcing and sales, and he noted the changing economic climate that comes with a new administration could prove beneficial to small businesses. He said, “There could be gaps in the marketplace that would actually help my business.”

Fresh and Ugly Produce will be attending the AFFI Frozen Food Convention March 407 at the Manchester Grand Hyatt in San Diego, taking advantage of networking opportunities with the group of primarily frozen food buyers. The annual event draws more than 1,400 processors, logistics providers, suppliers, retailers and foodservice distributors “from all sectors of the frozen food and beverage industry to conduct business meetings and learn about key industry issues,” according to the web site afficon.affi.org. 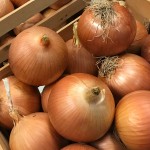 Market and Crop Updates for February 9