From new seed varieties to marketing through social media, virtually every nook and cranny of the onion industry is seeing change. And one cog in the industry’s wheel, transportation itself, is definitely a topic of intense discussion.

Driver shortage is a factor. Currently there are 3.5 million professional drivers, and wages are now 35 percent of the operational cost. By 2020 an increase of 21 percent is expected.

Figures from the first decade of this century counted 8.9 million people in trucking related jobs, including the 3.5 million drivers for 15.5 million trucks. More than 2 million of the trucks are tractor trailers. The stats at http://www.truckinfo.net/trucking/stats.htm said there are 1.2 million trucking companies, with well over 90 percent operating between one and 20 trucks.

Add to the mix the increased container traffic to the United States via the recently expanded Panama Canal, which is nearly triple what it was. Ships that were previously restricted to carrying 5,000 containers can now bring 14,000 containers through the 102-year-old canal.

In late June Dirk DeBoer of DeBoer Farms in Nyssa spoke at a transportation meeting attended by members of the Idaho-Eastern Oregon onion industry and noted that Peruvian onion imports have tripled in the last three years. DeBoer said imports will likely increase after the canal’s expansion, with the upshot being imported onions can reach the East Coast at an average of $2,000 per load, while a load of onions traveling from the West Coast to receivers on the East Coast averages approximately $6,000.

In investigating efficient, cost-effective transportation while addressing the shortage of drivers, multiple solutions are being considered.

In a July 11 post at http://www.industryweek.com/transportation/efforts-are-underway-uber-ize-motor-carriers, writer Paul Myerson, Professor of Practice in Supply Chain Management at Lehigh University, posits the possibility of motor carriers adopting the Uber business model, connecting drivers with freight shippers and/or receivers through an app on a mobile device. Seems like the logical next step.

Myerson provided some examples of how the apps already exist or are in development, citing Traansmission, “a platform connecting freight requestors (shippers, brokers, freight forwarders) with their preferred carriers to reduce time spent covering, tracking and delivering freight. The app concentrates on creating a private network of partners; Cargomatic, an app being developed for local shipping which targets shippers and local trucking companies with full or partially empty vehicles; and Keychain Logistics, which helps commercial truck drivers find freight from shippers and brokers. It enables shippers to directly book freight carriers, bypassing broker commissions with a network of tens-of-thousands of carriers all over the U.S.”

Not every app proposed will make the final cut, but there’s little doubt that Uberization is in play. 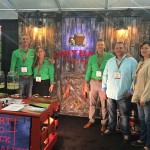