For Trish Lovell, returning on Sept. 11 to the onion sales desk at Curry and Co. in Brooks, OR, was like going home. In fact, she and her husband still own a home in Stayton, which is just east of Salem, Trish told OnionBusiness on Sept. 12.

“I worked here for seven years before going to Washington,” she said. Her previous job in onion sales with Curry’s operation is part of her 30-plus year career that began in 1986 with DeBruyn Produce in Ontario, OR, where she worked with Jerry and Steve Baker.

“Not long ago Aaron and Holly Ensign, the owners of Curry and Co., asked me to come back to head up onions as Matt Curry is leaving the company,” she said of her decision to move back to Oregon. Matt took the company helm in 2005 following the death of his father, and she said his plans after he departs include writing a book and possibly doing some public speaking.

On her second day back with Curry and Co., Trish told us she was enjoying getting settled at the sales desk and working with some of the new staff at the Brooks office.

Prior to her move back, Trish headed up sales at Agri-Pack in Pasco, WA, and she noted her onion experience has come entirely from the Northwest, she said. At Curry she interacts with five major growers, two in Washington and three in western Oregon.

The transition is, she said, going smoothly. Her three years with Agri-Pack expanded her sales/marketing portfolio to include fresh-market potatoes, and she said she expects to broker some spuds through Curry and Co.

“I’m the person to call for onions,” she said. “And right now we’re moving sweets, yellows, reds and whites. The growers are bringing in more yellows, and the whites and reds are in storage.”

Of the onion program, she said, “Everything is really good, and we’re hoping to grow what we have been doing. 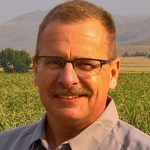