Columbia Basin: Gary Atkin, general manager and sales at Columbia Basin Onion LLC in Hermiston, OR, says the market is “a little slow right now,” but as we reported last week, PMA week and the week after are generally slow. Gary says the red market is high, and jumbo whites are fair. Yellows are little off this week. Exports have been strong, but Gary says there has been a dip in exports going to Japan. Reports from Hokkaido, Japan, indicate that the Japanese onion crop is very large. That, together with the weak yen against the dollar, has slowed Japan exports quite a bit.  On the upshot, more exports seem to be headed to Taiwan.

IEO: Dwayne Fisher, VP of Champion Produce in Parma, ID, said Champion is focused on managing its supplies now. “We are probably moving more than what we want to be right now, but the goal is to have long-term supplies,” Dwayne told OnionBusiness.com.

He said overall inventories look good long-term, and weather patterns in Texas and Mexico that may potentially delay those crops to market or move them out of the IEO window. “We want to have adequate supplies available for that time frame,” he said. “We’ve read reports that inventories are at decade lows, and if the shrinks continue to be higher than in past years, we looking at a very positive long-term market ahead of us. This week Champion is still seeing reds much higher than average, and the yellow market gaining strength.

Chris Woo, VP of Murakami Produce in Ontario, OR, said, “The market is hovering around $7.50 on 50# jumbo yellows.” Demand is moderate, and Murakami is doing well in keeping up with production in both retail and foodservice demand.  “A definite bright spot on the market is that Mexico is still in the market for medium whites and medium yellows,” Chris said. “The red market is steady and high and expected go higher at the first of the year when inventory gets depleted.” He said Murakami anticipates the usual lift in onion sales and increased movement for the weeks leading up to Thanksgiving.

Kent Sutherland, sales manager at J.C. Watson Packing Co. in Parma, ID, says overall demand is off. “It seems America is not eating as many onions this week,” Kent said. He added that the market is very stable. “Red onions continue to gain strength and the medium yellow market is gaining strength and expected to continue strength into the holidays,” he said. 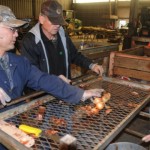