With more than 360 individuals registered for the event, the 2019 Idaho/Malheur Growers meeting Feb. 5 at Four Rivers Cultural Center in Ontario, OR, was one of the most heavily attended meetings on record. OnionBusiness.com’s Sherise Jones said coordinators reported in a jump in vendors, with nearly a dozen more than last year’s exhibitors.

In addition, Sherise said, the event’s speaker and session schedule was packed as well, with the keynote presentation during the luncheon given by Greg Yielding, new National Onion Association Executive Vice President.

“Loaded with enthusiasm, Greg covered the major issues in which the NOA hopes to assist the nation’s onion growers,” she said. “His coordinative efforts primarily focus on governmental and legislative topics facing today’s U.S. onion industry.”

Sherise reported that Greg began his speech explaining his 15-year background with the National Rice Growers Association. “Making the transition to onions was a natural for me,” he said. “Anyone that knows me knows I love three things: rice, onions, and dairy. And I knew I was in onion country when I woke up in my hotel room this morning to the smell of onions. I knew I was in the right place.”

Quickly focusing on the job at hand, Greg told the audience, “It’s always been my philosophy that if you don’t represent yourself, someone else will. That’s why it is so critical that as an industry we unite together to represent ourselves. For instance, Colin Peterson is a House Representative from Minnesota and is also the new House Ag Committee Chairman. Do you know how important it is that we get to know him and how beneficial it is that we have industry members in the state of Minnesota that can help? Then there is Pat Roberts from Kansas, Senate Ag Committee Chair – and we have onion industry members in Kansas, too. It is going to be our job to get to know these people and collectively approach them and others about the EPA and FDA.”

He went on to acknowledge past NOA legislative accomplishments. “Look what has been done,” Greg said. “You were able to bring together the industry on water, and it was effective. You know, 25 states in this country grow onions, and there is no reason not to make our voice heard. And we can all do that through an organizational effort by the NOA.”

Greg added he intends to organize efforts to legislatively address transportation and a guest worker program, and he is also a strong believer in trade.

“It is imperative that we promote ourselves to foreign markets and look to not only selling domestically but expand what we sell in foreign markets,” he said. “Take rice for instance. People would ask me why on earth I was trying to sell U.S. rice in China. That’s like trying to sell ice to an Eskimo. My answer was that while they may be the biggest rice producers, the Chinese are also the biggest rice consumers. And they are the largest rice importers. After promoting heavily, we were able to export there. Though there are trade barriers, we can address those.”

Whether an issue is legislative, research or promotion, Greg said he intends to build on the foundation laid before him. “Everything starts with the grower,” he said. “If the grower isn’t making money, then the vendors in this room and the communities that surround aren’t making money. The growers will be the focus of what we do.”

The new executive VP concluded his presentation with a call to join the NOA to support its efforts. Then he a marketing and promotion director surprised the crowd by selecting five goody bag prize winners.

View images of just a few of the many attendees at this year’s Idaho/Malheur County Onion Growers Meeting:

Ken Teramura and Ray Winegar inducted into Hall of Fame 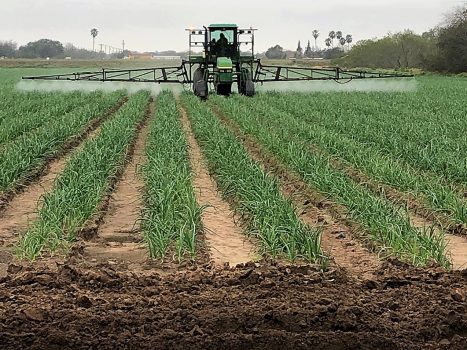