Many family stories coming out of the Southwest are colorful, but that of Young Guns Inc. and Billy the Kid Produce’s Franzoys in New Mexico is Technicolor, starting with the immigration of Joseph and Celestina Franzoy from Austria around the turn of the 20th century and continuing to the dubbing of the couple’s grandson, Bill, as “Billy the Kid.”

According to Chris Franzoy, CEO of Young Guns Inc. and great-grandson of Joseph and Celestina, his forebears left Austria in the early 1900s for the promise of a new life in the United States. They settled in the mining regions of Michigan, where Joseph worked as a coal miner – but always dreaming of being a landowner Out West.

It was only a few years before Joseph left the coal mines of Michigan behind and headed to the Southwest, where in time he and Celestina would their make home in Hatch, NM, and raise their 10 children.

“Joseph and Celestina Franzoy had 10 children, all born in the U.S., and they had 250 acres of land in New Mexico,” Chris said of the early family farm.

“The first plantings were cotton and corn, but in the 1930s the family began to plant chile peppers and onions.

As time passed the family grew, and more land was purchased,” he said.

“Today the family has grown to over 700 [editor’s note: Yes, 700 family members!], farming approximately 20,000 acres in the Hatch area,” Chris said. “Young Guns Produce is the marketing arm for all of our companies and farming operations.”

Young Guns is located in Las Cruces, where Chris, his wife, Tammy, and the company’s marketing team handle sales, logistics and accounting. 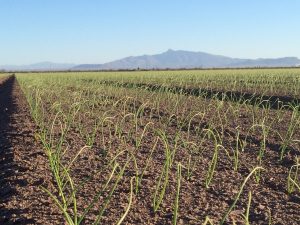 Onions are grown and shipped by Billy the Kid Produce, one farming arm of Young Guns. And Chris said, “We own and operate Hatch Chile Factory LLC located in Hatch, NM, where we pack fresh green chile for retail and frozen green chile for foodservice and retail.”

Chris and his brothers – Mark, Brian and Justin – are the fourth generation of Franzoys, and “ between the four us we have 12 children of whom all are interested in continuing our family farming tradition.”

Onions make up a big part of Young Guns, and it was started by Chris’s dad, Bill.

“Billy the Kid Produce was born in the 1970s when my dad left his parents’ farming operation to start his own. Billy and Phyllis Franzoy’s humble beginnings were on 90 acres of land in Hatch. Over time they acquired more and more land, and the business grew. Today we farm about 2,500 acres between Deming, Hatch and Las Cruces, with two-thirds of our total onion production coming from our farms and the rest from an outside grower,” Chris said. He added, “We also have an Arizona onion deal which compliments our program by giving us onions to market in May, The Northwest is on our radar for future expansion because it will allow us to ship year –round.”

Now, about that name. Billy the Kid. Yep. It’s a good story.
“Our father Billy was nick-named Billy the Kid when he was three years old,” Chris said. He continued, “… because he accidentally shot his brother Jerry in the leg.”

It is brothers Mark and Brian who do the farming, and youngest brother Justin manages the onion production at the packing shed.

“These guys are among the top farmers in the country, constantly innovating new ideas and improving on efficiencies,” Chris said proudly. “Consistent quality is the focus at the farm. Justin designs and builds most of the packing equipment and manages operations during season.”

Young Guns/Billy the Kid grows reds, whites and yellows, including sweet onions. “Our season starts May 1 with our Arizona crop, May 20 with our New Mexico crop and then Aug. in Washington to run to the end of April,” Chris said.

He commented on the change in varieties over the years, saying, “Most onion varieties have improved over the years, with more pink root resistance, higher yields and longer shelf life. Some newer varieties harvest earlier, allowing us get started a couple weeks sooner – which is good so we can get our crew trained and the equipment tuned up for the big push.” 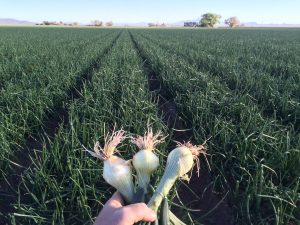 Selling 40/60 to retail and foodservice, Young Guns has seen an increase in reyail the past few years, Chris said, attributable to the fact that “we have made changes in our farming operation to deliver a high quality onion with a good skin.” He said, “Just as important, we completely revamped our packing line to eliminate bruising and deliver cleaner, brighter product.”

Tech is evident on the farm and in the shed. “Our irrigation method is sub-surface drip, which allows us to apply water and nutrients directly to the root zone,” Chris said. “Our tractors have been upgraded to the new technology for cleaner exhaust emissions and also GPS technology.”

He said the packing shed features “the best technology and systems for packing onions, and we knew we had to automate to stay competitive and pack a quality product faster. With rising labor cost or shortage of it and increased competition from Mexico, we are happy we made the investment.” The shed has a new 12-lane cup sizer equipped with a photo optic sorter, and Chris said it “does a fantastic job… We can custom size onions to what the customer wants, and with the added sorting capacity we now grade our onions three times before they go into a bag.”

The operation has six robotic palletizers and weighers, delivering 4,000 50# bags per hour and “allowing us to keep up with demand very easily,” he said.

Though he describes the topic of immigration as “very sensitive,” Chris said, “… but what I don’t understand is why are so many Americans against deporting illegals? As an employer, I can’t hire them – so what is the big deal? I support guest worker programs, and we have H2A, but it needs some tweaking.”

About trade, he said, “I think NAFTA was a mistake. Since its inception, we had to stop planting crops like jalapeños, and our red and green chile acres have plummeted by 80 percent. And it’s not over yet. I hope our current administration will come through with tariffs on imports. If not we, will have to continue to automate eliminating more U.S. jobs.”

Chris said onions are obviously a necessary component to good meal planning, and consumption should continue to increase.

“However, we need to pay attention to Generation Y and learn their eating habits as well as their lifestyle, because they have less time to cook and are looking for healthy low-cost food they can prepare quickly,” he said. 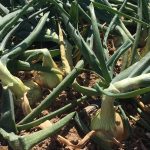 Market and Crop Updates for April 13