It is with unabashed pride in American exceptionalism and the belief that the United States of America make up the best nation this world has ever seen that OnionBusiness.com wishes all our readers a very happy, very blessed Independence Day.

We hope you join us in celebrating the freedoms and the diversity that set our country apart from all others on the planet, further hoping you revel not only in the day itself but in its place in history and its significance in our lives today.

We ask only one thing, and it’s just a request, not a demand: Let’s all ignore the silliness of political correctness and political hyperbole, if only for 24 hours. Let’s come together as Americans, without hyphen and without prejudice. Let’s be the country we were founded to be – the Land of the Free, Home of the Brave.

Two hundred forty-three years ago a proclamation was made that, while not heard instantaneously via Twitter or posted for millions of social mediaites to like or trash, definitely rocked the world.

It was a powerful declaration, and it began, “When in the Course of human events it becomes necessary for one people to dissolve the political bands which have connected them with another and to assume among the powers of the earth, the separate and equal station to which the Laws of Nature and of Nature’s God entitle them, a decent respect to the opinions of mankind requires that they should declare the causes which impel them to the separation.

We hold these truths to be self-evident, that all men are created equal, that they are endowed by their Creator with certain unalienable Rights, that among these are Life, Liberty and the pursuit of Happiness.

Fifty-six men signed our country’s Declaration of Independence on July 4, 1776.

Military conflict with Great Britain had actually started the year before and would continue until 1783, an eight-year war fought to establish a new nation.

During that time of conflict, a seamstress by the name of Betsy Ross stitched together a flag, its colors reflecting those of the Great Seal of the United States of America as resolved by the Continental Congress, the fledgling country’s governing body from 1774 to 1789.  The white stripes signify purity and innocence. The red stripes signify hardiness and valor and the blue field behind the stars signifies vigilance, perseverance, and justice.

During the time of the Revolutionary War raged, tens of thousands of the estimated three million “Americans” fought for independence from the Crown of England – 80,000 militia and Continental Army soldiers fought at the height of the war. British soldiers numbered 56,000 at that same height, with another 30,000 German mercenaries fighting for the British.

During the more than 1,500 military engagements of the war, the colonists carried 5 ft. muskets that weighed 10 pounds. Each musket ball weighed about an ounce. And the soldiers ranged in age from 10 years – 10 years! – to 57 years. And General George Washington, the leader of the United States Army and our nation’s first president, was paid $0 for his service.

We hope – we pray – you will consider the cost of our freedom in these words written by American poet Katharine Lee Bates in 1893. Today the song is “America the Beautiful,” and one verse says, “O beautiful for heroes proved / In liberating strife, / Who more than self their country loved / And mercy more than life! / America! America! / May God thy gold refine, / Till all success be nobleness, / And every gain divine!”

And we hope when you hear “God Bless America,” written by Jewish composer Irving Berlin in 1918 and traditionally performed by wartime patriot and singer Kate Smith, you are moved to tears at the prayer, “God bless America, land that I love, / Stand beside her and guide her / Through the night with a light from above. / From the mountains, to the prairies, / To the oceans white with foam, / God bless America, / My home sweet home.”

God has blessed America, and we give thanks. 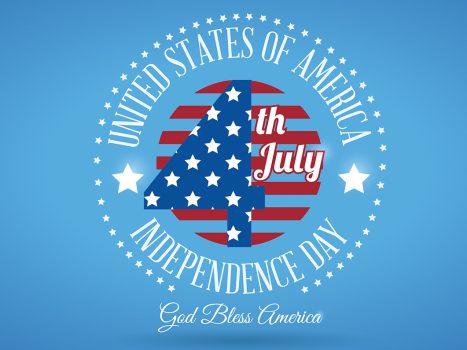